It's an exciting time for Argentine winemaking. Despite long shadows cast by Malbec, the country's signature red grape, wines made from other grapes drew nods of approval at a recent tasting. In Part 2, we take a look at Argentine wines from Salta's dizzying high-altitude vineyards to cool, windswept Patagonia. 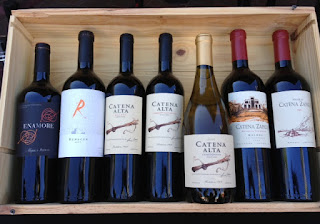 
Torrontés
Considered Argentina's signature white variety, this Muscat relative is usually unblended and unoaked. Floral aromatics and a flavor profile of tropical to citrus fruits underscored by minerality make Torrontés irresistible. The grape may excel in Salta, but versions from other regions don't disappoint. Sparkling versions pop with pure delight.

Maipe 2011 Torrontés
From high-elevation Cafayate in Salta. Guava goodness rings in at a slightly higher alcohol (14.5%) than other versions. $10

Just behind Torrontés in white-grape acreage, Chardonnay is finding its place among Argentine whites.

Chakana Sparkling
From Agrelo in the higher Lujan de Cuyo district of Mendoza. All stainless, half Chardonnay, half Pinot Noir. $19

Deseado 2012
A 100% Torrontés sparkler from Patagonia. A festive wine from Familia Schroeder that sees no oak with 9.5% alcohol and a touch of sweetness. $15

Catena 2010 Cabernet Sauvignon
Aged 12 to 14 months in oak, from Mendoza. Firm, with blackberry and cassis. $20

Pascual Toso 2009 Reserve Cabernet Sauvignon
Made from 100% Cabernet and oak-aged for 12 months. Savory notes with firm acidity. From Barrancas, in Mendoza's Maipù district. $20

Other Argentine wines worth your wine dollar include Bonarda, usually made in an easy-drinking and fruity style and Pinot Noir, especially from cooler regions such as Rio Negro in the Patagonian south.

With world-class winemakers, vast and diverse terroirs, and a strong wine culture rooted in European tradition, Argentina stands poised to enlarge its mark on the global wine scene. These wines provide a snapshot of Argentina's wine diversity, as mighty Malbec leads the charge.

* All prices estimated retail; expect retail outlet and regional variations.
Posted by Till at 2:47 PM