The wine world lost a force provocateur with the passing of Serge Renaud late last month. The Bordeaux-based scientist caused a disruptive moment with his 1991 appearance on the CBS program 60 Minutes, an episode credited with embedding the term French Paradox in the American lexicon. In the segment, Renaud described studies that linked lower rates of heart disease among the French to their consumption of healthy fats and custom of washing down fat- and cheese-laden meals with wine. When asked to explain why even the northern French, whose diet contains very little olive oil, had lower rates of heart disease than Americans, Renaud said, "My explanation is, of course, the consumption of alcohol."

By up-ending the prevailing view at the time that only considered alcohol's potential for harm, televised comments by Dr. Renaud and epidemiologist R. Curtis Ellison, MD created an ensuing buzz that helped propel funding and research activity to delve deeper into the paradox and, by extension, the nature and prevention of cardiovascular and other inflammatory diseases. The segment, which provided enough fodder to prompt 60 Minutes to revisit the story in 1995 and again in 2009, also caused Americans to rethink wine. What followed into the 1990s was a dramatic upswing in American wine consumption, and a new taste for reds.

While not all of Dr. Renaud's theories gained traction, the University of Bordeaux professor offered the scientific community a new lens with which to study heart disease and diet. Specifically, Dr. Renaud's work shed light on alcohol's anti-clumping effects on platelets and how this action appeared to prevent the formation of blood clots that set the stage for heart attacks or strokes. His groundbreaking papers in the 1960s and 1970s challenged conventional wisdom regarding cholesterol and saturated fat through experiments that linked atherosclerosis and fatal clots with effects of dietary fats on platelet function and biochemical changes to blood vessel walls.

Perhaps his most far-reaching findings involved studies published during the 1980s and 1990s on effects of dietary change on health, specifically, the heart-protective Cretan or Mediterranean diet. A 1995 study by Renaud published in the American Journal of Clinical Nutrition criticized the so-called prudent diet, which the American Heart Association championed for heart patients at the time. Renaud's paper showed the prudent diet was clinically inferior to the Cretan Mediterranean diet of the 1960s, with more than a 70% reduction in cardiovascular events, heart attacks and overall death rates in heart patients who followed a Mediterreanean diet that gave less emphasis to meat and was richer in olive and canola oils, grains, fish, legumes – and red wine.

Cardiologist Tedd M. Goldfinger, Chairman of the Renaud Society, an association of medical professionals with an interest in the wine-health connection to which this author belongs, called the Society's patriarch "a champion of health through nutrition," whose many contributions included scientific insights into fatty acid metabolism and the range of benefits associated with a Mediterranean diet on cardiovascular health. 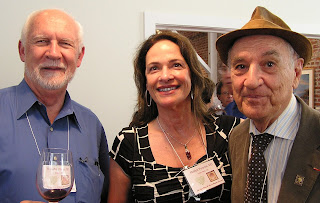 Looking back at his prolific career for an article in the Lancet published on the first day of the new millennium, Renaud reflected to author Bruno Simini, “If I hadn’t lived with my grandparents and great-grandparents on a vineyard near Bordeaux, perhaps this idea wouldn’t have occurred to me. When you see people reach the age of 80 or 90 years, who have been drinking small amounts of wine every day, you don’t believe wine in low doses is harmful.”

Renaud passed away within sight of his seaside home in Carcans Maubuisson in the Médoc, a few weeks shy of 85th birthday. We are grateful for his contributions, and thankful to have shared in his gentle presence.
Posted by Till at 4:51 PM