As October temperatures begin to drop, red wine lovers are reclaiming their love for big reds, which held about as much summertime appeal as a hot shower. Warm weather red rescue came in the form of Pinot Noir, Beaujolais and Barbera. Along with rosés and crisp whites, these three reds made cool company for fare that called out for juicy, low-tannins wines with good acid, lighter body and perky fruit.

Now that autumn is in the air, taste buds eager for heartier foods also begin to crave red wines with more animal – feral wines with bigger fruit and tongue-lashing tannins. 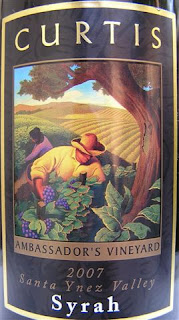 Syrah is a red that answers the call to fall. Rich in flavors of berry compote, Syrah has a meaty, leathery character that, depending on its style and origin, can also unfurl layers of smoke, herbs and peppery spice. Whether known as Syrah or by its Aussie moniker Shiraz, this red's flavors and girth play well against savory fall foods such as game meats, root vegetable dishes, stews and lamb.

Many New World Syrahs that have entered the wine market in the past decade began their journey from grape to glass in climates warmer than the Northern Rhône valley. Such wines tend to be less earthy, with more new oak influence, plush fruit, softer tannin structure, an alcohol-driven richness and a peppery finish. While big on intensity, warm-climate Syrah can lack the complexity, balance, ageability and earth-driven nuance of classic Old World wines from Côte-Rôtie and Hermitage.

Spurred by the efforts of a group of Rhône-focused vintners that eventually came to be known as the Rhône Rangers, plantings of Syrah in California increased dramatically at the end of the last century, with harvested tonnage jumping nearly one-hundred-fold over the course of a decade, beginning in 1992. Though Syrah covers more California acreage than any other Rhône variety, the Syrah grape crush accounted for three percent of the state's total winegrape crush, according to 2010 figures from the Wine Institute.

New World vines have matured. Site selection continues to evolve. Outside of France, winemakers are climbing the steep slope of the wine-learning curve. Today, California Syrah shines in Edna Valley at Alban and at Kenneth Volk in Santa Maria Valley. Chuck Carlson, one of California's earliest Rhône champions, chose the Santa Ynez Valley as the site for Curtis' Rhône-styled wines. Beyond its varied expression along the Central Coast AVA, Syrah has also found a home in Washington State, where Christophe Baron of Cayuse makes thrilling Syrahs to rival those of his French homeland. These are gorgeous and sexy wines without a doubt, with no sluts in sight.

Syrah's a hurting varietal right now. Seductive yet shunned, she languishes on store shelves, passed over for Pinot or some blend that's neither here nor there. Was the Australian wine glut to blame? Or was it that newer wine consumers, confused by Syrah-Shiraz or Syrah-Petite Sirah choose to simply skip it instead? Whatever the reason, cooler climate Syrahs are not only well worth your wine dollar, but will also land you better odds of picking a winner under $20 than a comparably priced Pinot Noir or Cabernet Sauvignon.

New World vintners are now finding their groove with this classic varietal, and the results shouldn't be missed. Get a piece of great value Syrah, as in the Curtis. If you're game to shell out a C-note or more, you can go home with a knockout such as Australia's Penfolds Grange, California's Alban and Justin, or Washington's Cayuse. Mid-range, look for Washington's Abeja and Reynvaan (Walla Walla), Charles Smith (Columbia Valley) and Betz (Red Mountain), among others. Go for a romp with Rhône Ranger Justin or Santa Barbara County's Jaffurs. Whether from a warm or cooler zone, Old World or New, take a little ride with the Syrah style that suits your palate.