Vacation brings discovery, and that includes wine. On a summer break to postcard-pretty Jackson, Wyoming, we looked west for an exciting wine discovery – Idaho wine. 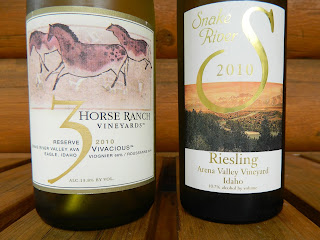 In the late 19th century, French and German immigrants brought grapes to the Lewiston-Clarkston Valley of Northern Idaho, where they founded the first wineries in the Pacific Northwest. While these vineyards produced notable wines, Prohibition brought an end to Idaho winemaking. Despite repeal of the Volstead Act in 1933, Idaho grape growing didn’t resume until 1970. Today, wine production is concentrated in the north, southwest and southeast portions of the state.

Despite its legacy as the birthplace of Pacific Northwest wine, the Gem State is the least familiar of the four wine-producing regions. Unlike Oregon, Washington and British Columbia, Idaho has no shoreline. However, the state shares ancient geologic history with its neighbors, including Ice Age floods and soil types that range from sandy and wind-blown to volcanic. Idaho’s southwestern winegrowing region possesses basalt soils and a growing season marked by warm summer days and cold nights, as in Washington’s Columbia Valley. The 40-degree day-to-night temperature variation allows grapes grown at higher latitudes to mature and ripen during long, sunshiny days while the chilly nights help preserve grape acidity.

The Snake River Valley was Idaho’s first American Viticultural Area, designated in 2007. At more than 8,000 square miles in area, it is nearly the size of New Jersey and the third-largest AVA in the western United States, extending into two easternmost Oregon counties. Winegrowing regions range from 1,500 to 3,000 feet in elevation with about 1,800 acres under vine. The AVA is home to most of the state’s wineries, including Idaho’s largest family-owned winery, 3 Horse Ranch Vineyards. Founded in 2003, the sustainably and organically farmed winery has been on an upward trajectory. With nearly twenty years’ experience making Idaho wine, Greg Koenig (who also makes wine and spirits – including huckleberry vodka – under his own label) knows how to elicit finesse and typicity from 3 Horse Ranch Vineyards' Rhône varietal rootstock plantings. Winery owners Greg and Martha Cunningham are etching their marks in the rocky terrain and rolling foothills with a petition for a proposed Willow Creek AVA that would encompass their vineyard lands north of Eagle, Idaho.

The 3 Horse Ranch Vineyards Reserve 2010 Vivacious is a lightly oaked blend of 66% Viognier and 34% Roussanne that unfolds with aromas of honeysuckle and stone fruit. Medium-bodied and complex, it delivers flavors of honeyed white peaches, apricot and orange zest and a lingering, tropical-inflected finish. A bottle of the current 2012 vintage is listed at $17 on the winery website.

A tip from the helpful staff at Jackson Hole’s Pearl Street Market led us to another find, the Snake River 2010 Riesling. This 100% Riesling from the Snake River Winery’s 30-year old Arena Valley Vineyard is an off-dry, varietally correct delight with peach, lime and honey on the palate and a crisp, mineral finish. It delivers great value too, with an online price of only $10.

Wine Press Northwest named Snake River Winery its 2013 Idaho winery of the year after its 2009 Estate Cabernet Sauvignon took platinum at the publication’s wine competition. The winery is revving for Riesling, Idaho’s most planted wine grape, with 2,000 cases produced from the 2012 vintage.

Taken altogether, Idaho wines barely comprise 0.1% of California’s production. Yet, as vines and sites mature, so does Idaho winemaking. Vintners are gaining experience and seek to match grape varietals to distinct Idaho microclimates and soils. Given their success with white wines, winemakers are exploring – and succeeding – with reds too. Idaho winegrowers can now boast 11 white and 16 red varietals, plus blends, sparklers, rosés, dessert and ice wines.

Awards aside, Idaho has shown it’s time to give their wines a nod. Take a shine to wines from the Gem State. They’ve shed their potato sacks and are due to dazzle. Vacation breaks optional.
Posted by Till at 3:22 PM