Does wine help protect against heart disease? That, in a nutshell, was the focus of my presentation last week at Tasty Topics, the monthly educational series put on by the desert's Go Red For Women campaign of the American Heart Association. 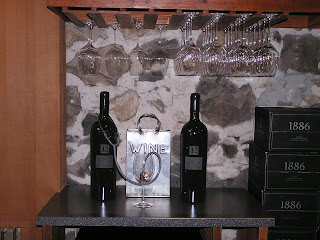 Wine, Women and Health provided an update of recent developments and controversies linking wine with health. After a historical review of wine-health associations, the talk centered on the investigative flurry that followed the now-famous Mediterranean dietary studies begun in the late 1950s with Ancel Keys' Seven Countries Study.

But it wasn't white-coated scientists and medical reports that turned Americans' attention to wine. Rather, it was a 60 Minutes television broadcast in 1991 that caused red wine sales to soar. In its French Paradox segment, correspondent Morley Safer asked if the French proclivity for a glass of wine alongside rich, high-fat cuisine could explain that country's paradoxical lower rate of heart disease. Ten years later, the American Heart Association issued a science advisory that noted more than 60 published studies in support of a heart-protective role for alcohol. Groups who drank in moderation, that is, one to two alcohol-containing drinks a day, had significantly lower death rates and lower rates of cardiovascular disease such as heart attacks, strokes and heart failure.

In 2005, a state-of-the-science summary written specifically for heart patients was published in Circulation, the journal of the American Heart Association. The paper cited a risk reduction of about 30%, or about one-third fewer deaths and heart attacks among men and women who drank alcohol in moderation a few times a week.

To answer the question of whether red wine is better than other forms of alcohol, the Circulation paper cited the Copenhagen Heart Study of more than 13,285 men and women who were followed for 12 years. That study found an even greater drop-off in deaths and cardiovascular events among moderate wine drinkers, who were half as likely to die of heart attacks or cardiovascular disease as people who did not drink at all. On another hand, the paper also cited studies in which red wine drinkers did not fare as well, without a clear heart-protective benefit over those who drank beer or spirits.

Studies in test tubes, animals and human studies have pointed to pathways and precise mechanisms that seem to account for the beneficial effects of moderate alcohol consumption on cardiovascular health. For example, one or two drinks daily boost HDL, or good cholesterol. Alcohol also inhibits blood clotting, similar to the way aspirin is used in heart patients to decrease blood platelet stickiness, and thus their ability to clump together to form a blood clot. Compounds in red wine such as resveratrol also appear to help blood vessels relax and maintain healthy tone. These compounds also interfere with wayward processes that churn out protein molecules that damage blood vessel walls.

Given the many known dangers of overindulgent alcohol use – or any use at all by at-risk populations such as pregnant women, youth and those with a family history of alcohol use disorders – no scientific society endorses alcohol use to reduce risk of heart disease. Instead, the AHA and other medical societies advise patients to discuss alcohol on a one-on-one basis with their doctor. With barely enough time to talk about active health problems, medications, tests, etc., some patients may be reluctant to bring up drinking, or ask about health risks and benefits associated with wine. Further, some doctor-patient discussions may be waylaid by physicians who are unaware, dismissive or who disagree with the AHA advisory.
What about recent reports that have linked drinking any amount of alcohol to an increased risk for cancer, specifically cancer of the breast? This is clearly a situation that warrants discussion between patient and physician, with the expectation that oncologists may be more likely to discourage taking on any perceived increase in cancer risk. It's worth remembering, however, that cardiovascular disease kills four of ten American women, more than all types of female cancers, and nearly more than the next five leading causes of female deaths combined. Look for more on this touchy subject in another post.

If you missed the presentation at Bellatrix at The Classic Club, get on the mailing list for future Tasty Topics or send a gmail to arrange a presentation for your corporate or community. Meanwhile, give a toast to spreading awareness about women and heart disease. Get a read on your own lifestyle and risks here. Learn more about what we can all do every day to live healthier lives by getting involved with Go Red For Women. Salute!
Posted by Till at 6:06 PM